Roseanne Barr has added Sara Gilbert, her TV daughter, to the list of reasons why she says the show “Roseanne” was cancelled.
USA TODAY

Sara Gilbert is walking away from “The Talk.”

The longtime co-host and creator of the CBS daytime talk show tearfully announced Tuesday that she will leave following the current season.

“This is something that I have been struggling with for a while, and going back and forth, but I’ve decided that it’s time for me to leave the show at the end of this season,” Gilbert said as the audience gasped. “I obviously love it here, and like I said, this was extremely difficult.”

The actress, 44, revealed that her demanding schedule has created an imbalance between her work and personal lives, affecting herself and her three children – sons Levi Hank, 14, and Rhodes, 4, and daughter Sawyer Jane, 11.

“Last season, I did ‘The Conners’ and was also producing and (hosting) here. I loved it and felt totally empowered, but also, if I’m being honest about it, my life was slightly out of balance,” she said. “I wasn’t able to spend as much time with my three kids as I’d like, or take time for myself.”

Gilbert stars on “The Conners” as Darlene, the daughter of Dan and the now-deceased Roseanne Conner. She also serves as executive producer for the reboot series. 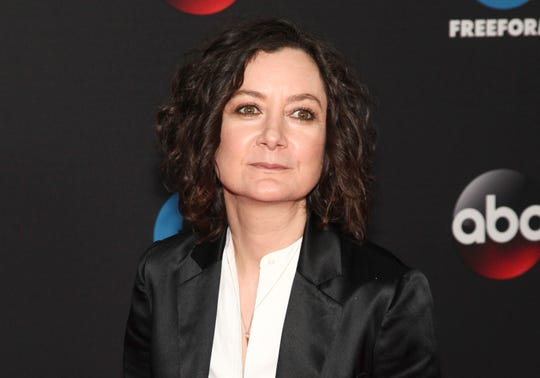 Sara Gilbert, a co-host on the CBS show “The Talk,” announced that she will be leaving the show at the end of this season. (Photo: Andy Kropa, Invision/AP)

She said the decision was difficult to make because “this is a place that I love and a place that I’m extremely happy,” but adds that it’s necessary to pursue other acting and producing opportunities.

“I love the hosts, I love the crew, I love our staff. I’m so grateful to the audience for letting me in your homes every day. It’s been such an honor,” she said.

Gilbert is the latest co-host to say goodbye to the talk show.

In September, co-host Julie Chen departed “The Talk” after her husband, Leslie Moonves, was ousted as CBS chief following sexual misconduct allegations. She was replaced in January by “Dancing With the Stars” judge Carrie Ann Inaba.

The other co-hosts are Eve, Sharon Osbourne and Sheryl Underwood.