JERUSALEM (AP) — The Latest on Israel’s election (all times local):

Channels 12 and 13 are projecting Likud will capture 35 seats in the 120-seat parliament, compared to 34 for Benny Gantz’s centrist Blue and White party. Earlier, Channel 13 had projected the parties deadlocked at 36 seats apiece, while Channel 12 gave Gantz a solid 37-33 lead.

Both stations early Wednesday also showed Likud and its religious-nationalist bloc of allies controlling a majority in the 120-seat parliament.

Their updated projects mirrored partial results, which gave Likud a slight lead with about a quarter of votes counted.

The leader of Israel’s Blue and White party has declared victory in parliamentary elections, despite mixed results in exit polls.

Addressing a raucous crowd of supporters. Benny Gantz said Tuesday’s vote was a “historic vote” for Israel and urged his rival, Prime Minister Benjamin Netanyahu, to step aside.

Opinion polls show Gantz’s party tied or with a slight lead over Netanyahu’s Likud, though the polls appear to give Netanyahu a better chance of cobbling together a parliamentary majority with his hard-line ideological allies. 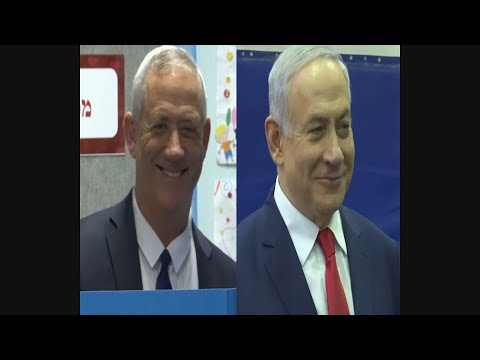 Gantz says that as leader of the largest party, he should be chosen by Israel’s president to form the next government.

A senior Palestinian official says that Israelis have voted to “maintain the status quo,” as exit polls revealed no clear winner in the general election.

Saeb Erekat, chief Palestinian negotiator and champion of Palestinian statehood, called Tuesday’s results “a clear-cut vote” to maintain the years-long impasse in the peace process, adding, “they want us to live under a deeper apartheid system than that existed in the darkest hours of South African apartheid.”

Exit polls show that of the 120 seats in Israel’s parliament, only 18 members support the two-state solution, the international community’s preferred option for the past decades

Both Prime Minister Netanyahu and the leaders of the rival Blue and White party, former military chief Benny Gantz and centrist politician Yair Lapid, have declared victory in Israel’s elections as murky exit-poll predictions rolled in.

Netanyahu announced Tuesday: “A right-wing bloc led by the Likud party won a clear victory. I thank the citizens of Israel for the trust.”

Gantz and Lapid also declared: “We won! The Israeli public has had their say!”

They added that “These elections have a clear winner and a clear loser,” saying, “the president can see the picture and should call on the winner to form the next government. There is no other option!”

Both camps vowed they would call on allies to help them form a governing coalition.

Israeli exit polls indicate Prime Minister Benjamin Netanyahu’s Likud and the rival Blue and White party are locked in a race that is too close to call.

Channels 12 and Kan TV gave the Blue and White party, headed by former military chief Benny Gantz, a narrow lead over the Likud, while Channel 10 TV showed them in a tie in Tuesday’s vote.

With neither side having a clear advantage, they will have to wait for official results to come in overnight.

Arab leaders are making a last-minute push to implore their followers to vote in Israeli elections.

The decision could have negative repercussions. Arab parties could struggle to receive enough votes to enter parliament, potentially bolstering Netanyahu’s Likud party and its hardline allies.

Arab political activists say the campaign has boosted turnout to 46% with under an hour to go. Israel’s central elections commission says overall turnout is over 61%.

Israeli politicians are making the most of social media to campaign online until polls close at 10 p.m., with the main contenders taking to social media to appeal to citizens to vote as turnout flags.

Prime Minister Benjamin Netanyahu filmed himself at the beach in Netanya on Tuesday and urged people to go vote or “wake up tomorrow to a leftist government.” Benny Gantz, a former army chief of staff who seeks to unseat Netanyahu, shared a video in which he appears to assist a motorcyclist who was involved in a traffic accident.

Other politicians have urged Israelis to go vote, as voter turnout was lower than previous elections.

The current election regulations in Israel bar television and radio campaigning on election day, but not social media.

A prominent Israeli pollster says that Israel has never seen such a decline in Arab turnout, calling it “the biggest drama” facing the national election.

Prominent Arab politicians took to social media to demand their constituents push back against ballot boycott calls that put their parties at risk of dropping below the parliamentary threshold.

Veteran lawmaker Ahmad Tibi called the low turnout “a real danger” to his party and the other Arab factions.

Arab citizens, representing nearly 20% of Israel’s population, could help sway the vote. But many Arab citizens have pledged to boycott the election in protest of Netanyahu’s divisive campaign tactics and legislation declaring Israel the nation-state of the Jewish people.

The election is largely seen as a referendum on Prime Minister Benjamin Netanyahu, who pandered to nationalist voters by vowing to annex the Israeli-occupied West Bank.

Speaking in the West Bank city of Ramallah on Tuesday, Abbas said the Palestinian leadership hoped the outcome would help Israel “come to the negotiating table” and embark “on the right track to reach peace.”

Trump’s contentious policy changes, such as recognizing Israeli sovereignty over Jerusalem and the Golan Heights, have sidelined Palestinians, who seek Israeli-annexed east Jerusalem as their capital.

Netanyahu’s challenger, Benny Gantz, has indicated he would not foreclose future peace negotiations.

Police said they were working to “maintain public order” after “a number of suspected irregularities” in northern polls.

Arab parties lambasted the cameras as a ploy to depress their constituents’ turnout.

The Likud party declined to comment, but when a reporter asked Netanyahu about the claims as he cast his ballot, he responded, “There should be cameras everywhere. Not hidden. It’s important to ensure a legitimate vote.”

Israel’s election committee says midday voter turnout stands at 24.8% — or down 2 percentage points from the 2015 elections.

But the statistic may not be a prediction of the overall turnout as polling stations close at 10 p.m. on Tuesday and many anticipate a last-minute surge of voters heading to the polling stations.

Prime Minister Benjamin Netanyahu has delivered increasingly impassioned pleas to voters to come out and support him as the day wore on. He took to Facebook in a steady stream of videos to rile his national base by warning if supporters failed to vote, they’d wake up to a “leftist” government led by his chief challenger Benny Gantz.

He says such a scenario is backed by a “secret deal” with Arab parties, which he often brands as his political foe.

Lapid voted near Tel Aviv on Tuesday surrounded by activists and supporters, claiming his party is “just a step away from victory.”

He says: “We need two more seats to win these historic elections in Israel. A vote for any party except Blue and White is a vote for Netanyahu.”

Lapid and Gantz, together with a slate of other ex-generals, formed the centrist Blue and White party in hopes of mobilizing opposition to Netanyahu, who faces serious corruption charges.

Israel’s president and several other politicians have cast their ballots in the general election, offering messages to voters and urging for a good turnout.

President Reuven Rivlin will have the task to choose — after the election — a party leader most likely to forge a governing coalition.

He urged citizens to vote as he cast his ballot, saying “the only people who decide who will be the next government and prime minister are you.”

New Right party leader, Naftali Bennett, asked voters not to be swayed by Prime Minister Benjamin Netanyahu’s campaign to pull votes from smaller rightist factions. Bennet says he wants “everyone to vote for the New Right” so that “Israel returns to winning.”

Avi Gabbay, leader of the Labor party that was once Israel’s left-wing flagship, told reporters he hopes Election Day “ends with the replacement of the government.”

Netanyahu voted on Tuesday in Jerusalem alongside his wife, Sara. He called on all Israelis to vote, calling it a “sacred act.”

Netanyahu is seeking a fifth term in office despite a cloud of looming corruption indictments against him. Another term would make him Israel’s longest-ever serving leader, surpassing founding father David Ben-Gurion.

He faces a stiff challenge from retired military chief Benny Gantz, whose Blue and White party has inched ahead of Netanyahu’s Likud in polls. Netanyahu still appears to have the best chance of forming a coalition, though, with a smattering of small nationalist parties backing him.

Benny Gantz, the main challenger to Prime Minister Benjamin Netanyahu in Israel’s general elections, has cast his ballot, calling for a “new dawn” for the country.

Gantz voted early on Tuesday in his hometown of Rosh Haayin in central Israel alongside his wife, Revital. He called on all Israelis to get out and vote, saying they should “take responsibility” for their democracy.

He says that voting will “let us all wake up for a new dawn, a new history.”

Gantz’s Blue and White party has inched ahead of Prime Minister Benjamin Netanyahu’s Likud in polls. Netanyahu still appears to have the best chance of forming a coalition, though, with a smattering of small nationalist parties backing him.

Voting has begun in the Israeli elections as the country decides whether longtime Prime Minister Benjamin Netanyahu remains in power.

Polling stations opened at 7 a.m. Tuesday with exit polls expected at the end of the voting day at 10 p.m. Official results are expected to come in overnight.

Clouded by a series of looming corruption indictments, Netanyahu is seeking a fifth term in office. It would make him Israel’s longest-ever serving leader, surpassing founding father David Ben-Gurion.

He faces a stiff challenge from retired military chief Benny Gantz, whose Blue and White party has inched ahead of Netanyahu’s Likud in polls. Netanyahu still appears to have the best chance of forming a coalition, though, with a smattering of small nationalist parties backing him.