Former president Jacob Zuma’s legal battle continues in the KZN High Court in Pietermaritzburg, where he and co-accused Thales are seeking a permanent stay of prosecution. 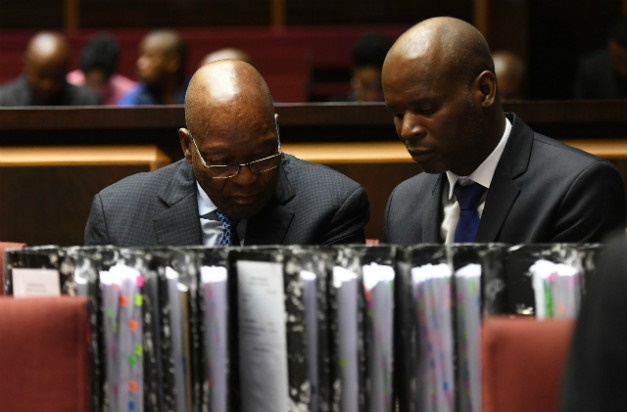 The cases that form part of Zuma’s “Stalingrad defence” according to the State:

2011 – Mr Zuma’s (ultimately unsuccessful) challenge to the DA’s locus standi in the DA’s review application, the reviewability of the decision of the acting NDPP to discontinue his prosecution and to the furnishing of the record to the DA

Conspiracy theories aside, the case against Mr Zuma is very strong – State

The reason for the decision to prosecute former president Jacob Zuma on charges of racketeering, money laundering, fraud and corruption does not matter, even if it was politically motivated.

This is one of the arguments set to be put to the KwaZulu-Natal High Court in Pietermaritzburg by advocate Wim Trengove SC on Thursday, as he argues against an application by Zuma for a permanent stay of prosecution.

On the other hand, Trengove is expected to point out to the court that the case against Zuma is very strong, and that evidence exists which proves his guilt.

Equally, Zuma has failed to set out the exceptional circumstances he needed to prove to the court why he deserves to be permanently let off the hook.

Arms company Thales has tried to distance itself from former president Jacob Zuma, as both parties seek a permanent stay of prosecution on charges relating to the now-infamous Arms Deal.

But this angle from Thales’ lawyers on Tuesday sparked a volley of questions from a full bench in the Kwazulu-Natal High Court in Pietermaritzburg.

Zuma is accused of taking bribes from Thales (then Thomson CSF) during the Arms Deal in the late 1990s. Zuma and Thales have filed applications for a permanent stay of prosecution.

Arguments for Zuma were put forth in an emotive day of arguments by advocate Muzi Sikhakhane SC on Monday.

Former president Jacob Zuma on Monday told his supporters that the ANC would have done better at the polls had he joined the party’s elections campaign earlier than he did.

Addressing throngs of his supporters at Pietermaritzburg’s Freedom Square following his appearance in the city’s high court, Zuma said his decision to join the ANC campaign helped change the minds of party supporters who did not want to vote for the ANC.

“There were these rumours that some of our people were planning not to vote for the ANC during the elections. I told them you can’t do that — if you have a problem with an individual in the ANC, you don’t punish the ANC.

Apartheid laws and conspiracies: ‘You can’t conspire to charge an innocent citizen like Zuma’

Former president Jacob Zuma on Monday took a swipe at the National Prosecuting Authority, saying prosecutors had been “ambitious” to charge him.

He told a group of supporters gathered outside the KwaZulu-Natal High Court in Pietermaritzburg, who waited for hours to hear him speak, that the case against him was 15 years old, and he did not understand why it was still being pursued.

There is a witch hunt against me, Zuma tells supporters outside court

Former President Jacob Zuma has labelled the corruption trial against him a politically-motivated witch hunt and says his lawyers will show the court how the NPA conspired to prevent him from becoming president.

“Those who were meant to be witnesses have even forgotten their testimony. Some have died,” he told supporters in isiZulu outside the KwaZulu-Natal High Court in Pietermaritzburg.

“We are now arguing that if this trial continues, it’s just a witch hunt. We can’t have a trial based on this. We argue this trial is not fresh and witnesses have died and the presiding judges have retired.”

During then-president Jacob Zuma and French arms dealer Thales’ application for a permanent stay of prosecution on Monday, advocate Muzi Sikhakhane SC turned to transcripts of the Spy Tapes to illustrate that Zuma was victimised.

Sikhakhane’s aim in reading sections of the Spy Tapes into the record was two-fold: “I want to show the disdain with which they discuss Mr Zuma,” he told the KwaZulu-Natal High Court in Pietermaritzburg.

He also used this as his hammer to drive home the sharp wedge of his argument – that the National Prosecuting Authority acted “unconstitutionally” in the way it handled Zuma and the corruption charges against him.

Zuma should have been charged in 2005 with Shaik – defence

The KwaZulu-Natal High Court in Pietermaritzburg heard on Monday morning that former president Jacob Zuma should have been charged in 2005 alongside his financial advisor Schabir Shaik.

This was argued by Zuma’s own lawyer, advocate Muzi Sikhakhane SC, who is trying to persuade the court to grant an application for a permanent stay of prosecution. The matter is being heard by a full bench, consisting of Judges Bhekisisa Mnguni, Tholo Poyo-Dlwati and Esther Steyn.

Zuma and French arms company Thales are facing charges of fraud, money laundering, corruption and racketeering for a series of alleged bribes paid to Zuma through Shaik, during the multibillion-rand arms deal in the late 1990s. Shaik was found guilty of fraud and corruption in June 2005 for irregularities surrounding the same matter, and sentenced to an effective 15 years behind bars.