Latest News
Home /WATCH: YouTube star Simone Giertz got tired of waiting for Tesla to create an electric bakkie so she created her own – meet the Truckla

Earlier in 2019, Tesla revealed its new Model Y and teased what could be a new battery-powered bakkie. News of a new electric bakkie from the company has been churning the rumour mill for quite some time.

Tesla CEO Elon Musk has teased the front-end of the new bakkie but hasn’t provide any more details. YouTube star Simone Giertz, tired of waiting for her own electric bakkie, decided to create her own.

Giertz said: “I got tired of waiting for Tesla to release their pickup truck, so I made my own. And I named it Truckla.”

Watch the video below: Full clip at the end of this article

Gietz said: “I don’t know if this is gonna be the smartest or the most stupid thing I’m ever gonna do but bottom line is I really want an electric pickup truck and more specifically, I really want a Tesla pickup but they haven’t released one yet.” She says she’s been planning to create the bakkie for more than a year. Using a Tesla Model 3 as a base and working with many fellow YouTube stars, Gietz created a unique, albeit scrappy, electric-powered bakkie dubbed a Truckla. 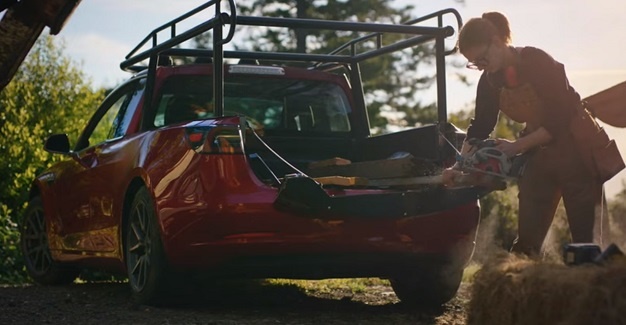 She also challenges Musk in her video: “Elon Musk,  this is me challenging you to build the world’s first functional Tesla pickup truck.”

Watch the full video below: