Latest News
Home /Pieter du Toit: Israelis are done with the Palestinians, and in Tel Aviv life goes on

“Strip away the [US] domestic and Israeli political considerations that determined the timing of the plan‘s release and the message to the Palestinians, boiled down to its essence, is: You‘ve lost, get over it.“– Robert Malley, the president of the International Crisis Group, in the New York Times, Wednesday, January 29, 2020.

The main promenade on the beachfront in Tel Aviv is a spectacular place. It runs from the old port in the north, to the south, in the direction of the medieval city of Jaffa, from where St Paul started his journey to Rome.

And when I say spectacular, I mean it. There are restaurants and beach bars, literally, every couple of hundred metres, where you sit with your feet in the soft white sand and order large Negev draughts and delicious tapas – the rand/shekel exchange rate notwithstanding.

Luxury hotels tower above the clean and pristine beaches, and outside gyms see Israelis work on their muscle tone while getting a tan in the late afternoon Mediterranean sun.

Close to the Tel Aviv yacht club is the Gordon pool, an Olympic-sized swimming pool where locals clock training miles before work every day. The pool, right on the beach, is like the one in Sea Point, Cape Town, but makes ours look like a murky farm dam in comparison. The beach front and promenade in Tel Aviv is a spectacular place. (Pieter du Toit)

Cranes dominate the cityscape driving in from Jerusalem. They are everywhere. New high-rise buildings seem to be going up on every second city block, in among the shiny skyscrapers which already reach for the dusty Middle East sky. Looking at the logos and corporate colours on the buildings, CitiBank, HSBC and a multitude of other big finance houses and multinationals claim many of these buildings as offices.

And driving down Ben Yehuda Street, one of the city’s main thoroughfares, the chic restaurants, overflowing bars and heaving hot spots seem enticing after three days in contested Jerusalem and a day in decrepit Ramallah on the West Bank.

Tel Aviv is a bustling, modern, effective and hi-tech city – but it seems to be a mirage. It is only a couple of hours’ drive from the Gaza Strip and Palestinian West Bank, but is light years removed from the reality of the Middle East. Its people go about their business seemingly unaware of events to the south and east, with the normality of it all almost banal.

Ramallah, although more developed and modern than from what we see on television, remains a monochrome city enclosed on all sides by the Israeli military, with checkpoints and security and American-made M16 assault rifles regulating access. The city itself, apart from some businesses close to the checkpoint into Jerusalem, seems like it is dominated by informal and struggling enterprises. Not a place you would want to visit, unless you are a journalist.

And Gaza City, from afar, resembles a city under siege. It looks like a slum, with buildings constructed on top of each other and tales of rockets being fired at Israeli settlements told with grim determination by local Zionists.

“It’s a concentration camp,” a European diplomat, who once visited Gaza City, told me on my return to South Africa. Danny Tirza, a former colonel in the Israeli Defence Force, explaining how he planned and built the wall and fence system between Israel and the West Bank. (Pieter du Toit) 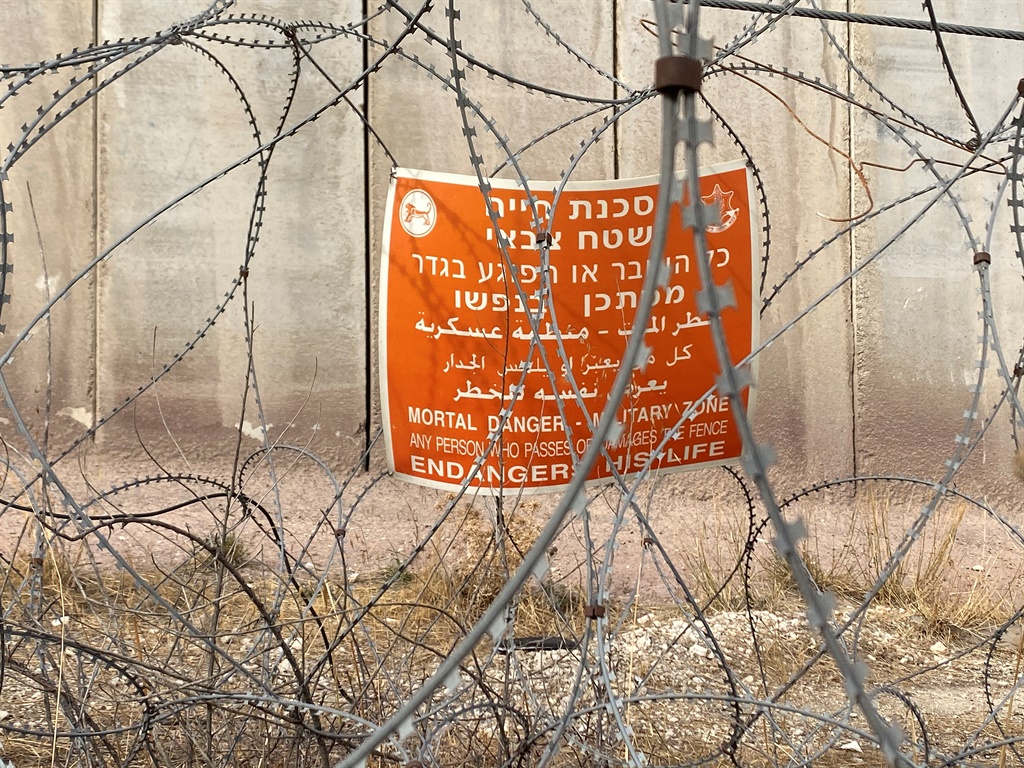 The wall and fence between Israel and the West Bank consists of a complicated system of deterrents meant to dissuade Palestinians from crossing the border. (Pieter du Toit)

The “peace plan” announced by US President Donald Trump and Israeli Prime Minister Benjamin Netanyahu is banal, with both parties agreeing to a future for the Palestinians without their participation or agreement. The plan sees the legalisation of Israeli settlements in disputed territories, the effective annexation of the Jordan River valley and “limited statehood” for Palestine – which means no statehood at all.

Trump and Netanyahu, announcing the plan on Tuesday at the White House in Washington D.C., could not wait to outdo each other with superlatives in describing not only the plan, but each other.

Both, of course, are facing serious political challenges, with the former impeached and the other indicted for fraud and corruption. And both need something to take to their supporters.

The Palestinians, unsurprisingly, rejected the plan and, as the Jerusalem Post reported on Wednesday, called for a “day of rage” to protest the unilateral imposition of a flawed plan, in part devised by Trump’s son in law, Jared Kushner, someone with absolutely no experience in international diplomacy, international politics or the Middle East peace process.

The Israelis are over Palestine. Not all of them and maybe not forever. But certainly, most of them and definitely for the foreseeable future. Grisha Yakubovich was in charge of planning and constructing a wall between Israel and Gaza. (Pieter du Toit) Gaza City in the distance. The Israeli government is building a wall to seal the Gaza Strip from the country. (Pieter du Toit)

Danny Tirza, a former officer in the Israeli Defence Force who was in charge of erecting the fence and wall between Israel and Palestine, talks with great pride and a lot of military bravado about the reasons why there is a barrier between the two sides and why it will remain there into perpetuity.

Former South African journalist – and a former editor of the Jerusalem Post – Steve Linde explained why the Israelis have now moved on from the exhausting and never-ending peace process.

And Israelis on a kibbutz looking across to Gaza City and in the “rocket city” of Sderot were determined to continue with their way of life, regardless what happens around them. 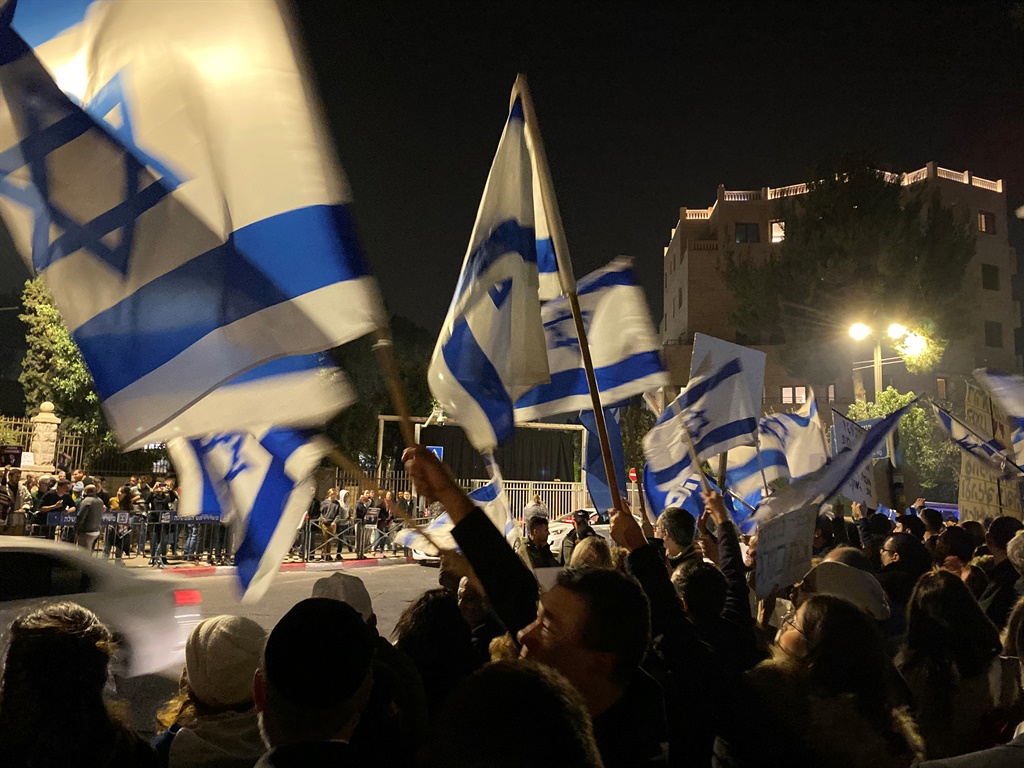 The golden thread running between these encounters, and many others during a visit to Israel in November 2019, is that for Israelis security is paramount. Everything and anything must and will be done to ensure the survival of Israel as a Jewish state. Even if it means security is achieved in the spirit of kragdadigheid, like PW Botha described his government’s philosophy.

There did not seem to be empathy towards the Palestinians. Or much conviction about a shared future.

The correlation between the political and ideological absolutism in present-day Israel and 1980s South Africa is stark, with the whole of society geared towards a “total onslaught”.

During apartheid there was a joke than many English-speaking South Africans voted for the Progs but thanked God the Nats were in charge. It seems many in Israel today feel the same way about Netanyahu: they do not like him but thank God he is still running the place.

And to ensure the security of Israel means, like it did in the war of 1967, that it must take the initiative and dictate terms. The country and her inhabitants seem resolutely unwilling to consider a future in which it needs to compromise. Netanyahu understands that. Benjamin Netanyahu, the Israeli prime minister, needs a good story to tell his supporters. His relationship with US President Donald Trump seems to be his biggest asset. (Pieter du Toit)

The ancient conflict between Israel and Palestine is complex and is underscored when you visit the Yad Vashem Holocaust Museum in Jerusalem.

It sets out, in excruciating detail, the rise of anti-Semitism in Europe, Nazi race laws in the 1930s and the planned murder of millions of Jews during World War II. It is a harrowing and emotional experience touching a train car used to transport people to their death in Auschwitz, seeing a mountain of shoes that belonged to the murdered and sliding open a drawer and discovering Oskar Schindler’s list.

One cannot help but have empathy for Jews, their descendants and their fears of being decimated.

It is against that backdrop that Israel’s insistence on securing a Jewish state is rationalised. “If not now, then when? If not us, then who?” goes the Jewish adage.

For Israelis, the time is now, and Netanyahu is the man.

Tel Aviv’s beaches shimmer in the early evening when runners glide past the open-air cocktail bars.

But in Ramallah and Gaza City anger and resentment is growing every minute.

* Pieter du Toit visited Israel and Ramallah at the invitation of the South Africa-Israel Forum.