Looking back over the first 20 days of South Africa’s attempts to halt the spread of Covid-19, shows a nation changed from watching a crisis from afar, to being gripped with fear and uncertainty, writes Kyle Cowan.

It has been 20 days since health minister Zweli Mkhize stood in the pulpit of the lower house of Parliament and announced to the National Assembly that South Africa had recorded its first case of Covid-19.

The news had broken just minutes before his announcement that a deadly new coronavirus, emanating from Wuhan City in China, that caused severe respiratory illness, which in some cases were fatal, had reached our shores.

In the days since the number of confirmed cases has quickly grown to 709, a number that is likely to increase, even with a 21-day nationwide lockdown being implemented at midnight on Thursday.

As of Wednesday evening the global death toll topped 20 000 people from 168 countries.

South Africa has yet to record a death as a result of the Covid-19 virus – making it by Wednesday evening the country with the highest rate of infections without a recorded death in the world.

The transition from a country watching from afar as a pandemic unfolded on distant and unfamiliar shores to a nation caught in the same snare, has been marked with fear, uncertainty and in a large number of people, nonchalance.

It is a marked difference seen in the smallest and most significant of ways.

It is the petrol attendant wearing latex gloves, the spritz of soapy water from a mask-adorned security guard at the entrance to the local supermarket.

Social media was replete with jokes and memes about the pandemic in the days leading up to Mkhize’s announcement. 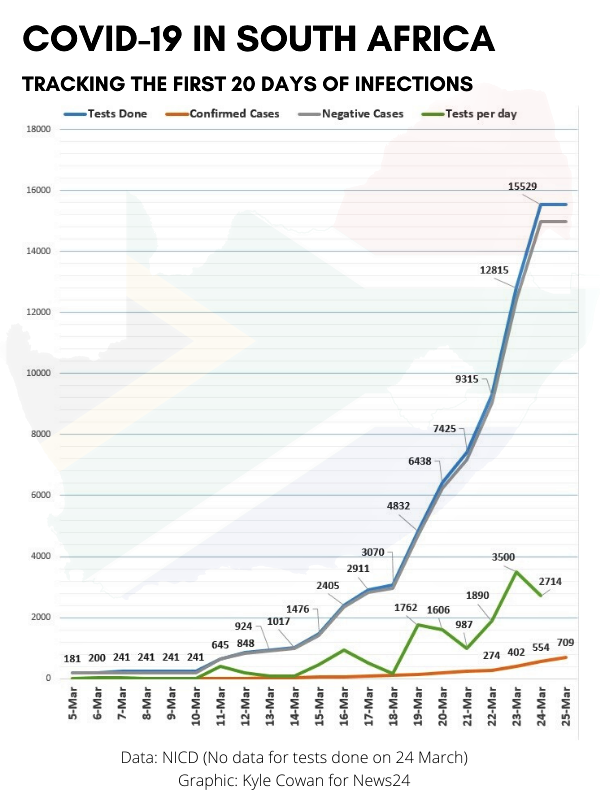 Days after president Cyril Ramaphosa announced a national state of disaster, a video emerged on social media of youngsters partying exuberantly by a roadside in Pretoria.

These videos have since been replaced with images of soldiers being deployed and headlines and hashtags are dominated by talk of the national lockdown.

The response by the Ramaphosa administration has been swift and decisive.

Some mistakes that could haunt us later were probably made, but for now, Mkhize, Ramaphosa and their advisors are enjoying rich praise for realising the potential for catastrophe very early in the outbreak – as they continue to work hard to find solutions to a looming public health disaster.

Countries such as Italy are feeling the pain of a slow response.

More people have died from the virus in Italy than any other country, the death toll just shy of 6 000 people.

In recent weeks, the number of cases in the US has risen alarmingly to just under 60 000, the death toll nearing 500 and experts are fearful the situation will continue to deteriorate considerably.

Here at home, lessons learned from other countries are being taken into account.

During a lengthy meeting between Ramaphosa and business leaders over the weekend, one influential businessman told a story of two cities in the US after the end of World War I in 1918.

In Philadelphia, newspaper adverts encouraged citizens not to forget to come out and support soldiers returning from France at its Liberty Loan parade in September 1918, just as the world was battling to come to grips with a deadly influenza pandemic.

Hundreds of thousands of people crowded onto the sidewalks to watch the parade and within days, the city’s hospitals were overrun.

In St Louis however, parades were cancelled and the public urged to avoid mass gatherings.

“With the flu pandemic at its peak, St. Louis decided to cancel its parade, while Philadelphia chose to continue. The next month, more than 10 000 people in Philadelphia died from pandemic flu, while the death toll in Saint Louis did not rise above 700,” the CDC noted.

The Liberty Loan parade is now called the most deadly parade in US history.

And in a way, those with knowledge of discussions said it quelled thoughts of continuing as normal among some of those attending.

Ramaphosa was also spurred to act by early projections that showed that anywhere between 87 900 and 351 000 people could die if government response was slow or inadequate. Reportage since by News24 has attempted to delve deeper into preparations underway by government, and the challenges facing the healthcare sector.

Fears over the shortage of basic protective equipment such as masks, the struggle to get test kits made available, the looming shortage of hospital beds and the discussions, the people who are understood to be leading the charge were among the stories.

But the stories also included the arrest and charging with attempted murder of a 52-year-old salon manager in Ladysmith, KwaZulu-Natal who continued to operate his business despite knowing he could be carrying the deadly Covid-19 virus.

He was charged in absentia and his court date postponed to a later date, to avoid further spread of the virus.

Whether or not people would be allowed to walk their dogs or go for a jog during the imminent lockdown was a bone of contention for most of Wednesday.

The lack of information, with the Department of Health deciding suddenly not to publish the number of tests conducted, a change from the norm over the past weeks, also baffled.

The potential for economic disaster looms as uncertainty over our future is a constant companion.

If the virus follows patterns seen in other countries, South Africa is on the precipice while the rock is crumbling away from under it.

A turning point has been reached.

To borrow a startling analogy from New York Times veteran health reporter Donald G. McNeil Jr who was a guest on The Daily podcast on Tuesday: “You know, some people have said this is like a war. And it’s as if your army has been marching forward, and the enemy has been shooting at you for two to three weeks now, and nobody has yet looked down to see whether or not they’re bleeding.”

“But very soon, we will see how many people have been hit.”

LIVE | The countdown to lockdown: here’s everything you need to know