Political allies and opponents alike remembered General Constand Viljoen, who died at the age of 86 on Friday, as having played a critical role in the peaceful transition to democracy during 1993 and 1994.

“He is one of the heroes of our democracy,” said former leader of the Democratic Party and the DA, Tony Leon, while Mac Maharaj, one of the ANC’s lead negotiators during the negotiations, said Viljoen was crucial in neutralising the threats of violence from the right-wing.

Viljoen was chief of the army during South Africa’s initial incursion into Angola in 1975 and rose to become chief of the SA Defence Force (SADF) under then-president PW Botha. He was widely respected as “a soldier’s soldier”, parachuting into enemy territory with his men and taking part in dangerous operations rather than remaining behind at headquarters. 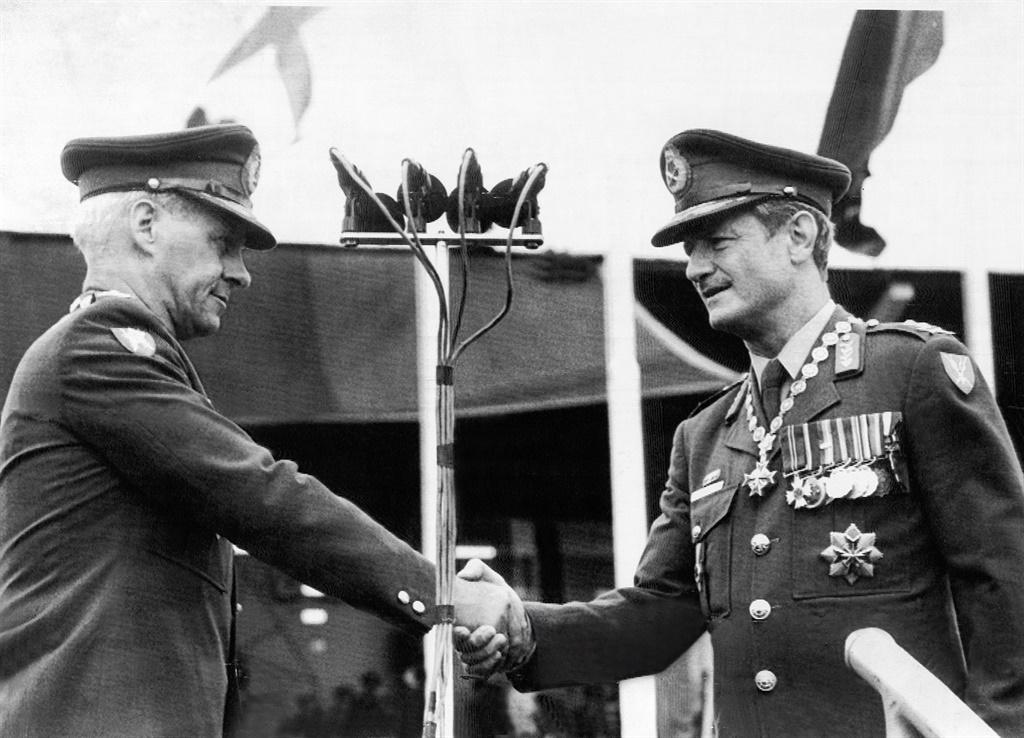 General Constand Viljoen handing over command of the SADF to General Jannie Geldenhuys in 1985. (Gallo Images).

He retired from active military service in 1985, but returned to public life in 1993 when he was persuaded to lead an umbrella grouping of right-wing organisations, the Afrikaner Volksfront (Afrikaner People’s Front), in 1993. He was lured into politics as the face of the white right, who up until then was represented by the dour figures of Andries Treurnicht and the Conservative Party, and the buffoonish character of Eugene Terre’Blanche and the Afrikaner Weerstandsbeweging (AWB).

Viljoen was an ardent opponent of a unitary democracy, advocating for a separate Afrikaner homeland, or volkstaat, making common cause with Inkatha’s Mangosuthu Buthelezi, who wanted the same for the Zulu. Nelson Mandela, the ANC leader at the time, struck up a good rapport with Viljoen, and personally sought to defuse the violent white right by persuading Viljoen to take part in the election.

Viljoen, who commanded enormous loyalty within the then-SADF, was under pressure to lead an armed insurrection, and famously told the then chief of the SADF, General Georg Meiring, that they “could take the country in an afternoon”.  Meiring replied: “Yes, that is so, but what do we do the morning after the coup?” This, according to historian Hermann Giliomee.

Viljoen finally rejected any possibility of violence after the AWB’s disastrous invasion of Lucas Mangope’s Bophuthatswana in March 1994. At the eleventh hour, he registered the Freedom Front to take part in the first democratic election, in which it secured more than 400 000 votes. Viljoen and his party, according to Mandela biographer Martin Meredith, became the democratic president’s “most loyal opposition” and the two men enjoyed a warm relationship until Mandela’s death in 2013.

Maharaj says, although he is saddened by Viljoen’s death, he did have a chequered life in service of his country. “Viljoen made the transition from the leader of the right-wing, who threatened to derail the negotiating process, to someone who agreed that negotiations were the right way to go. But we cannot forget that he also rose to become the top military commander under apartheid, who was highly praised, and that he led the raid on Cassinga,” Maharaj said on Friday.

According to Maharaj, the former army chief helped convince those on the white right that the need for a negotiated settlement was the only option. He “neutralised” the threats of violence and that enabled the democratic election to take place.

“He acted on his beliefs, and once he agreed to the negotiations, he believed it was the only way to go. It is important, in bringing tribute to Viljoen, to recognise that we have carved out a constitutional democracy with the help of people like him, and that the arrival of democracy enabled those who wanted an Afrikaner volkstaat to be heard, even though the idea never had enough support.”

Roelf Meyer, who led the National Party government’s negotiating team, said Viljoen was a personable man who showed great discipline. “He once told me he never voted while he was in the military, which shows the loyalty he had to his calling as a soldier. He will be remembered for the crucial role he played in bringing the right-wing into the fold, preventing them from resorting to violence and obstructionism.” Journalists interview three members of the AWB shortly before they were executed outside Mmabatho in March 1994. The AWB’s chaotic invasion of the then-Bophuthatswana convinced Viljoen a violent insurrection to prevent the coming of democracy was not an option. (Media24 Archives)

According to Meyer, the turning point for Viljoen undoubtedly was the AWB’s violent marauding in the then-Bophuthatswana. “Once he took the decision to take part in the settlement, it was honest and wholehearted. He made a big contribution in securing peace. He could have mobilised serving soldiers and former soldiers, but he chose not to.”

Leon, one of the DP’s lead negotiators and who assumed the party’s leadership in 1994, says Viljoen “helped make (democracy) happen”.

“And I can say, without fear of contradiction, that had he been alive today Mandela would be the first to acknowledge that, which he of course did. Viljoen brought in the right-wing, he broke the back of the Conservative Party and he sent a signal to the military that they should not enter the arena. He was a major figure and played a critical role.” Viljoen at a wreath-laying ceremony at the Voortrekker Monument in 2017 (Media24 Archives).

Pieter Groenewald, Viljoen’s successor as leader of the Freedom Front (now the Freedom Front Plus), told News24 that the former general was “a remarkable man”, who led from the front as a soldier and a politician. “He was up to the task during a difficult political period and helped to ensure a peaceful transition to democracy. He made his mark. It was a privilege to serve alongside him.”

Viljoen died on his farm near Ohrigstad, Mpumalanga, and is survived by his wife, Risti, four sons and a daughter, as well as grandchildren and great-grandchildren.