It is day five of the lockdown in Mamelodi, Pretoria. The status quo remains unchanged.

Children can be seen playing between shacks, groups of adults socialise with friends, while non-essential shops remain open for business. There is no police presence.

News24 visited informal settlements within the usually busy township in Tshwane, where residents are fully aware of the lockdown. They have felt its effects, but are struggling to heed the president’s call to stay home.

Sitting outside of his one bedroom shack, mending a broken wheelbarrow with a small welding machine, Bheki Khumalo, 29, said life was continuing unabated in the Eerste Fabriek informal settlement since the lockdown got under way.

Khumalo added some residents had tried to stay at home but living in impoverished conditions made it difficult to adhere to the lockdown rules.

Khumalo said he stayed at home and only left it to buy food, adding people were not following President Cyril Ramaphosa’s instructions to adhere to social distancing regulations.

“We see people are being close and making groups and stuff.”

He spoke of the grim outlook people faced in the area; the difficulty of being contained to your home, which is usually a one bedroom zinc shack that houses several people.

The shacks are practically built on top of one another, with little to no yard space. 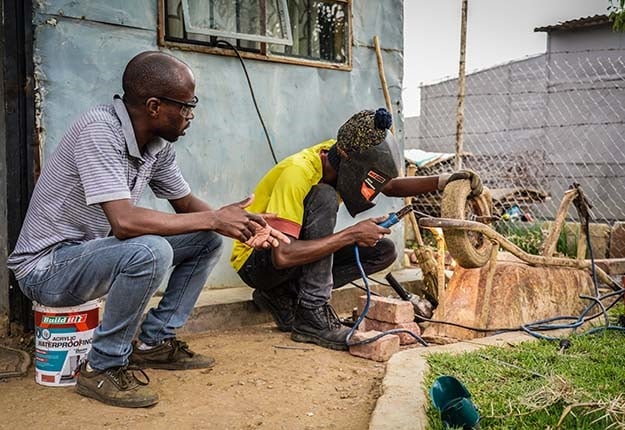 Because of the lack of water points and sanitation, people living in the informal settlement are also forced to share those spaces.

“We are facing difficulties [staying in one bedroom shacks] because we cook there, we sleep there, we do everything there. You can’t [stay in the house] the whole day because in the morning I must come out to get a breath of fresh air, to get water, I must go out at the tap.”

Khumalo also described the need for people to co-exist in order to survive. Neighbours are always visiting each other in order to help, either for food or other resources that the others may not have.

No policing in informal settlements

The informal settlement was also not being policed, according to him, telling News24 he had not seen a single police officer or soldier patrolling the passages between the line of shacks.

“On the main roads, I saw a roadblock, but here inside the location, there is nothing, I haven’t seen anything at all.”

Mahlatsi Mashego, 32, who stays in an informal settlement in Nellmapius echoed Khumalo’s sentiments with regards to the challenges residents were facing and the complete lack of policing.

“It is very difficult, but you can’t [stay] in one shack, It’s fine if the kids play outside but you can’t keep the children in the shacks,” Mashego said.

He added nothing had changed because people were still socialising and moving around, although he said alcohol was not being sold in the informal settlement. Mahlatsi Mashego (right) assists his neighbour with woodwork at the Nellmapius informal settlement in Mamelodi on the fifth day of the nationwide lockdown. (Chanté Schatz, News24)

Mashego said he had seen a police van driving in and out of informal settlement from time to time, adding no one’s freedom of movement was being policed or restricted.

While walking around the informal settlements, News24 noticed several groups of people socialising. They did not want to be interviewed, with one group saying they did not want Police Minister Bheki Cele to catch them.

Several non-essential shops were open for trade, including fast-food restaurants and a hair salon.