President Cyril Ramaphosa is leading a delegation of ministers for a meeting with bishops of the Zion Christian Church (ZCC) on Sunday as part of coronavirus interventions, ahead of what is usually a massive Easter pilgrimage to Moria in Limpopo.

The Presidency said it was a courtesy visit to express gratitude to the Zion churches, to provide update on government’s response to curbing the spread of the coronavirus, to seek the advice and counsel of the church, and to ask for prayers for the nation in the fight against Covid-19.

By Saturday, Limpopo had 18 confirmed cases of Covid-19, according to the Department of Health.

Minister in the Presidency Jackson Mthembu said the purpose of the visit was also to thank the church for not having its Good Friday service.

After Ramaphosa announced that, due to the declaration of a national state of disaster, gatherings would be restricted to fewer than 100 people in one place, there was uncertainty over whether the ZCC would cancel the massive pilgrimage to Moria in Limpopo, where a huge camp is set up for devotees who spend the Easter weekend praying.

The convoys of buses and fully laden vehicles, and the tent cities that mark this gathering, would also have put the meeting in violation of coronavirus lockdown regulations.

Concerns over church gatherings as a potential risk for the spread of the virus appeared to have been validated after a gathering in Bloemfontein, attended by national and international guests, was linked to the first cases in Free State.

Pastor Angus Buchan and African Christian Democratic Party leader Kenneth Meshoe revealed that they had tested positive for the virus after attending the service.

The third Covid-19-related death in South Africa was confirmed to be an 85-year-old man in Bloemfontein. He was an elderly pastor, who was also at the Bloemfontein church gathering attended by five international guests who later tested positive for the coronavirus. President Cyril Ramaphosa on his way to meet with His Grace Bishop Dr Bishop Barnabas Lekganyane at the Zion Christian Church in Moria in the Limpopo Province. (Presidency via Twitter) President Cyril Ramaphosa gets screened for symptoms of the coronavirus. (Presidency via Twitter) 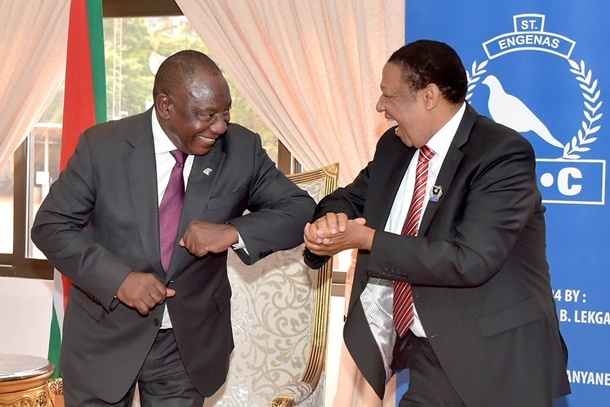 The meeting is a continuation of the cooperation between government and the religious community as champions of social justice who are able to positively influence the fight against the spread of the coronavirus. (Presidency via Twitter)

The president’s courtesy visit was to also seek the advice and counsel of the church and ask for prayers for the nation in the fight against Covid-19. (Presidency via Twitter) President Cyril Ramaphosa also thanked the church for deciding not to have the Good Friday Easter church service in support of the fight against Covid-19. The Zion Christian Church is the largest African-initiated church operating across southern Africa and attracts hundreds of thousands for the Easter weekend pilgrimage every year. (Presidency via Twitter)