For the homeless, especially those who have substance abuse problems, the lockdown has become a catalyst for sobriety, with opioid substitution therapy offering a new journey during these unprecedented times.

The Lyttleton sports park in Pretoria, which has been turned into a makeshift shelter for the around 300 homeless people during the lockdown, has been fraught with problems.

News24 previously reported that the homeless were running away from the shelter, returning to the streets, while others were only leaving to sell mattresses and bedding given to them – for drugs.

Police raids at the shelter also resulted in the discovery of drugs, knives and contaminated needles.

While everyone placed at the shelters has a history of substance use, not all have been looking for ways to satisfy their craving with a fix.

Some have had a paradigm shift and are using the lockdown as an agent for change, the start of a new fight for sobriety and a second lease on life.

Lockdown as a starting point for sobriety

News24 spoke to several people at the shelter on Thursday, who have been responding positively to the opioid substitution therapy.

Jason*, who has been spiking heroine for nearly a decade, has been clean for almost two weeks now, around the same time that he was picked up by law enforcement and dropped off at a shelter.

Every morning after breakfast, a long line is formed leading to a makeshift clinic where methadone, an opioid substitute, which is taken orally, is handed out. 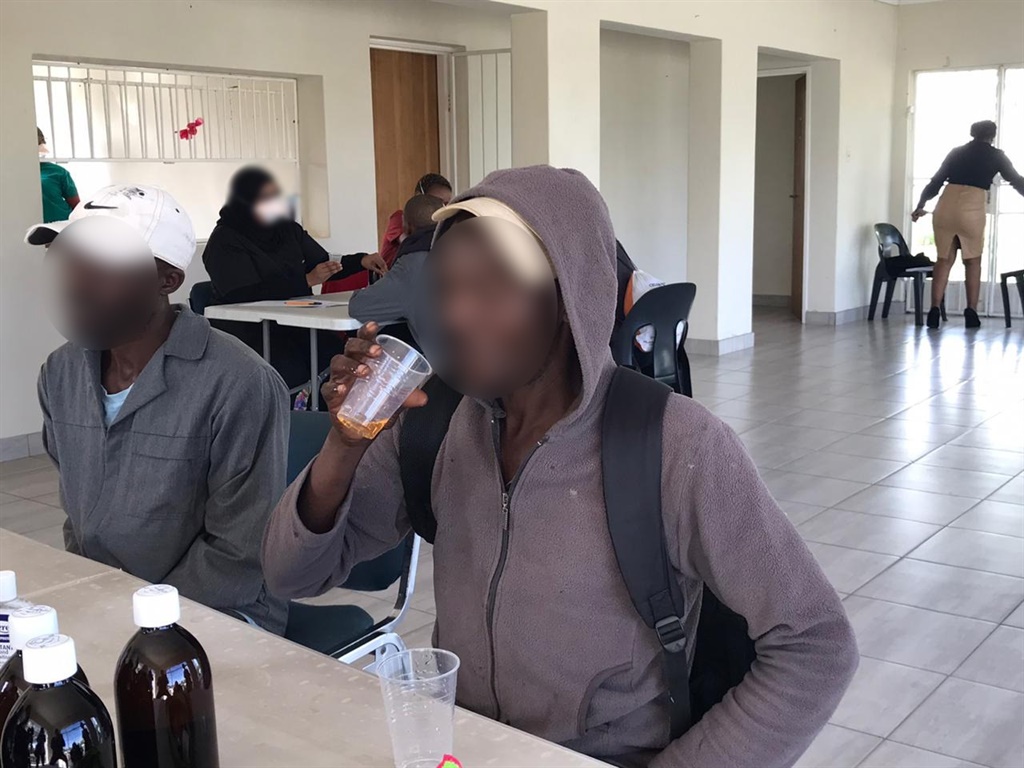 After taking his dose of methadone, Jason and two of his friends, both of whom use nyaope, sat on the soccer field waiting for a friend to bring matches, so that they can light their only cigarette, which will be shared.

Jason explained to News24 that the methadone has not only helped to eliminate withdrawals and cravings, but has also kept him level-headed.

“We would have not survived the lockdown [without methadone],” Jason said.

“It takes the cravings and the sickness, it takes it away; it’s like a replacement drug. It keeps you normal.”

*Thabo chips in and jokes about being shot by police if they didn’t have methadone at the shelters.

“It would have been a serious chaos, we would be cracking without the methadone,” Thabo said.

As *Lucky approached the group, he quickly passed the box of matches to Thabo, who instantly lights the cigarette and takes a long satisfying drag.

After sitting down, Lucky, who has been smoking nyaope for five years, quickly joins the conversation while removing his shirt.

“Even me, I am fine. Before I came here, I was very slender, weak. But now I will even do 20 push-ups, I am stronger than before.  The methadone is working for us, it is helping us,” Lucky said.

The four men said they were among the many at the shelter who have been reacting positively to the situation, but admitted that there were those who were not ready for change. They had been finding ways to get drugs into the shelter. This has been another obstacle for those who are trying to get clean.

“If they bring it (nyaope) back here, it’s not a long time since I stopped smoking. If I see someone smoking nyaope, I am going to have that pain (craving) – it will come back. I will ask for a pull,” Lucky said.

“Not all of us – some are not prepared to change, others have come here and are embracing it,” Jason added.

All three men said they have been working with social workers and are considering voluntary rehabilitation after the lockdown ends.

While the men have different reasons for their drug use, all three said life on the streets is impossible without the daily use of substances to escape from the reality of hard times.

Sasha Lalla, of COSUP (Community Oriented Substance Use Programme), which operates in conjunction with the City of Tshwane, said he had noticed the positive changes in some of the people at the shelters.

Lalla added that the lockdown and makeshift shelters also allowed for services to be rendered to this vulnerable community, and it included chronic medication.

He stressed that the majority of the homeless suffer from several conditions and that, if the virus creeps into the population, it would have devastating consequences.

Tshwane administrator Lebogang Mahaye, who visited the shelter on Thursday, was also pleased with the progress of the drug administration programme.

“Through administering methadone as an alternate drug, the City is making significant progress in preventing, treating, rehabilitating and reintegrating people affected by substance abuse,” Mahaye said.

“The City has registered approximately 6 700 people on this particular programme, with a 64.8% retention rate compared to the 50% global benchmark.”

*Not their real names as they asked News24 to conceal their identities.