The country will be subject to an unprecedented curfew from 20:00 to 05:00 if the government’s draft proposals regulating business and society under new risk levels are finalised next week.

Cooperative Governance and Traditional Affairs Minister Nkosazana Dlamini-Zuma and Economic Development Minister Ebrahim Patel announced wide-ranging draft proposals on Saturday, which included details on the reopening of some industries and movement of people as well as a continued restriction on the sale of alcohol.

The draft proposals are now open for public comment, with the final regulations set to be announced on Thursday. The current lockdown ends next Friday, with level 4 restrictions set to take effect on the same day.

But in the background, different role players are furiously lobbying the government to mitigate against further damage to the economy, with different industries citing continued losses doing enormous damage to various sectors, while fears about how the curfew will be implemented are also being expressed.

– Various business sectors will in the next 24 hours make representations to the Department of Trade and Industry to ensure the maximum level of economic activity can go ahead.

– The biggest national sports codes – rugby, cricket and soccer – are reassessing their positions after the announcement no organised sport will be permitted, with an incoming cricket tour by India, which could net the sport’s authorities millions of rand in revenue, now in doubt.

– Two experts of constitutional law questioned the legality of the curfew, while John Steenhuisen, the DA’s interim leader and leader of the opposition in the National Assembly, has rejected it.

SPECIAL HUB | Keep up to date with News24

The hard lockdown will conclude on Friday, but Dlamini-Zuma warned South Africa could quickly be returned to a level 5 lockdown (the hard lockdown) if the public did not comply with the regulations.

“We’ll be looking at data on a weekly basis,” she said.

But the basic rules in place are unlikely to change: movement is restricted unless it is absolutely necessary; physical distancing, sanitation, hygiene and the use of appropriate protective equipment are still essential. Covering the mouth and face will be mandatory from 1 May, ideally through wearing cloth face masks.

He said the police were already working together with other security services such as the SA National Defence Force as well as the metro and traffic police departments.

“We will rearrange ourselves if needs be and look at patterns, identify areas where there is greater non-compliance where we will increase capacity,” Naidoo added, saying this did not mean areas where compliance was good would be left unattended.

Steenhuisen told News24 the curfew was a further step towards recent “draconian and authoritarian tendencies”.

The country’s biggest opposition party does not believe the curfew “is constitutional or necessary”.

“Furthermore, any restriction needs to be carefully balanced against its efficacy in combating the virus. It is very difficult to do so when there is a massive and glaring lack of transparency around the data being used to inform the decision,” he said.

Is the curfew constitutional?

Elmien du Plessis, an associate professor of law at North West University, said the Disaster Management Act allowed for the restriction of movement, which should be for the management of the disaster.

But whenever a fundamental right was limited, there should be a “limitations test” as per Section 36 of the Constitution, she added.

“Usually this boils down to a proportionality test: Is the infringement on the right to movement proportional to the aim that the legislation [regulations] wishes to achieve? Some will say the curfew will not pass that test because it is too invasive.

“And the state will have to show why it is not,” Du Plessis said, adding the state needed to be as transparent as possible in explaining why it took these decisions.

Professor of constitutional law at the University of Cape Town Pierre de Vos reiterated the curfew needed to pass a rationality and proportionality test to be considered lawful.

“In other words, is the curfew necessary to achieve the purposes of the lockdown?” he said.

For example, the government could say the curfew was justified because people might gather late at night, Vos said.

“That’s just the rationality test. The second issue is: The regulations clearly limit your right to freedom of movement, and then you do the proportionality test.”

This involves asking whether the limitation to the right – in this case, the right to freedom of movement in the form of a curfew – is proportional to the purpose of the regulation in question.

In a hypothetical legal challenge, the government will also have to show whether there is a less serious way to achieve its aim of stopping the spread of the virus than infringing on the right to freedom of movement in this way.

Patel said level 4 regulations will see 1.5 million more workers in the country join those who have been working in essential services since lockdown, adding: “We want people to stay at home.”

– Tobacco products can also be sold. However, both Dlamini-Zuma and Patel said the Cabinet would consider public input on the matter.

– Exercise will be allowed under strict conditions, but no organised sporting events or gym visits are allowed.

– Alcohol sales are still banned, and will not be allowed in level 3 for on-premise consumption.

Martin Kingston, who is leading Business for South Africa’s (B4SA) consultation with the government on the economy, said the government had invited businesses to directly engage it on the proposed level 4 framework for sectors, which they also received on Saturday.

B4SA will also be collecting the business community’s input to present a consolidated response to the government. The different sectors have until midday on Monday to provide their feedback, meaning that Tuesday’s announcement will likely consider and incorporate most businesses’ views.

“It will be the views of business across the spectrum of large and small businesses, local and multinationals, regional and local and indeed individual companies to ensure that our views are registered,” Kingston told News24.

Restaurants Association of SA CEO Wendy Alberts said: “We understand that the government doesn’t want us to gather people and that our industry won’t be the same again, but we need to make sure the business model will be sustainable.”

The country’s biggest sporting codes were also dealt a heavy blow, with rugby and football’s hopes of resuming the Super Rugby competition and Absa Premiership behind closed doors – but televised – being all but dashed. The sports rely on advertising income and broadcasting deals to stay afloat.

SA Rugby president Mark Alexander told News24 negotiations with the government would continue in what was fast becoming a desperate effort to find a solution.

“Professional sport is being hard hit by this and it could cost us hundreds of millions of rand,” he said.

Jacques Faul, the acting chief executive of Cricket South Africa, said the body could lose almost R200 million in revenue if the mooted tour by the Indian cricket team in October was scuppered. “That’s the big one for us.”

This was due to the effect of the lockdown, which was designed to delay the spread of infections over a longer time frame, buying valuable time for health structures to prepare for the potential sudden influx of coronavirus patients.

It is unclear what the effect of the partial easing of economic activity may have on these projections, or whether widespread and mandatory health and safety guidelines will have a positive impact in terms of containing the spread of Covid-19.

A top epidemiologist at the National Institute for Communicable Diseases, Professor Cheryl Cohen, earlier told News24 the winter flu season would have a negative impact on finding and isolating coronavirus patients. 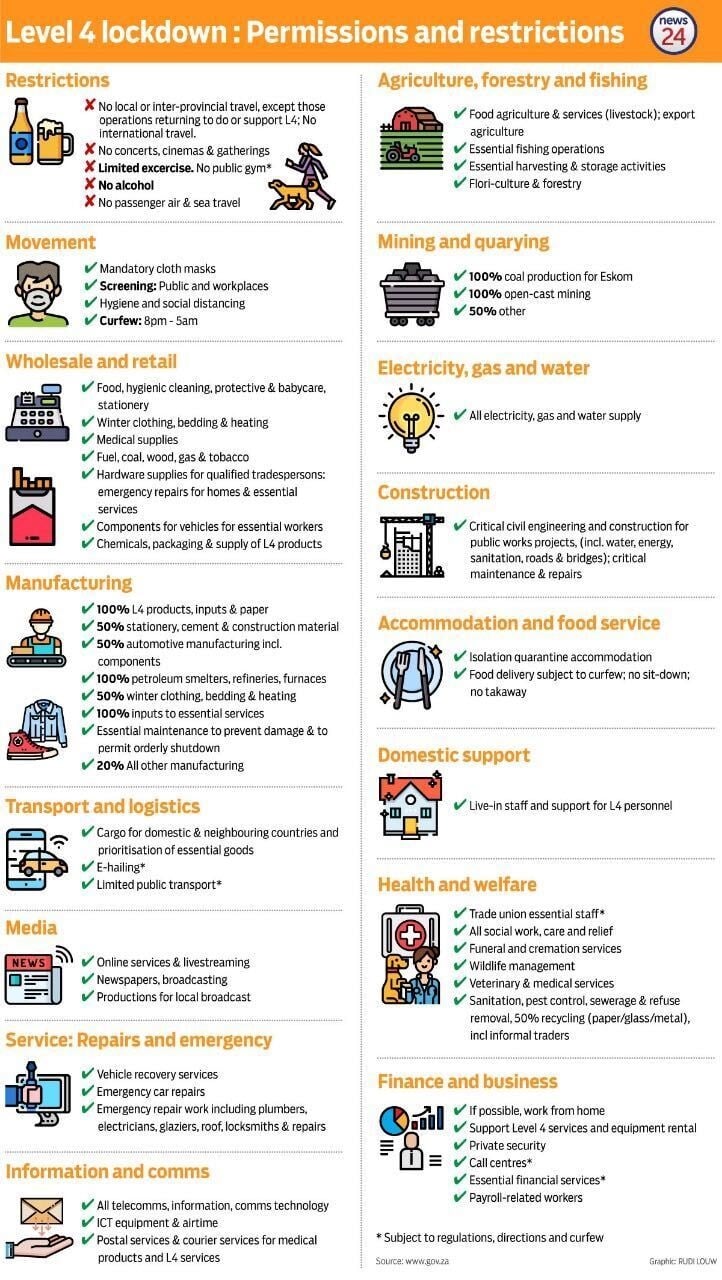 My wish is to meet…