With rugby in limbo due to the coronavirus pandemic, the Sport24 team has kept busy by digging into the archives, remembering memorable moments in the history of South African rugby.

There’s the old adage that you never write off a Springbok team and for this week’s agenda, Herman Mostert recalls 10 encounters since isolation where the national rugby team won against the odds.

It was a tough reintroduction to the international fold in 1992 for the Springboks, who lost home Tests to New Zealand (27-24, Johannesburg) and Australia (26-3, Cape Town).

Not many backed them to win a match on their year-end tour but France were upstaged in the first Test at the Stade de Gerland.

The Boks, who scored two tries through centre Danie Gerber and winger James Small, raced to a 13-0 half-time lead – a setback their stunned host could not recover from.

Captain and flyhalf Naas Botha converted both tries and also kicked a penalty and a drop.

France, however, rebounded to win the second Test 29-16 in Paris and square the series.

Nobody gave Francois Pienaar’s men a chance when they started a three-Test series against the world champions.

The Boks had just lost a two-Test home series to France (1-0, including a draw), and given the previous year’s 26-3 annihilation in the rain at Newlands, a Wallabies victory looked certain.

But the visitors ran in three tries without reply, with Small bagging a brace and outside centre Pieter Muller also crossing the whitewash to leave the Sydney Football Stadium faithful stunned.

The Wallabies would rebound though to win the series 2-1. They triumphed 28-20 in Brisbane – where Small became the first Springbok ever to be sent off in a Test – and the decider, 19-12 again at the Sydney Football Stadium.

The Wallabies headed into the 1995 Rugby World Cup opener as heavy favourites. Michael Lynagh’s men had not lost a Test in over a year and many tipped them to defend their World Cup crown.

But Pienaar’s charges refused to read the script, and with a boisterous Newlands crowd behind them, produced a stunning display to turn the tournament on its head.

There was the iconic moment when Bok winger Pieter Hendriks went around the great David Campese for the hosts’ first try and they never looked back from there.

Flyhalf Joel Stransky also dotted down and kicked four penalties, a conversion and a drop for a personal haul of 22 points.

The All Blacks were red-hot at the 1995 World Cup and firm favourites to beat the host nation in the final at Ellis Park.

With big Jonah Lomu tormenting opponents, the Kiwis smashed England 45-26 in the semi-final at Newlands but came unstuck against a staunch defensive effort in the final.

Stransky was the hero with his decisive drop goal in extra time. The pivot added another drop earlier in the game, as well as three penalties.

The result will go down as arguably South Africa’s finest day on a rugby field. This Test took place during a tough period for the Springboks under Rudolf Straeuli as head coach.

Given Australia’s poor record in South Africa, it may not go down as one of the biggest upsets in rugby history, but the Springbok class of 2002 needed this win badly.

Corne Krige’s men had lost all their Tri-Nations matches that season and were desperate to salvage some pride in their final game.

The Test will be remembered for fullback Werner Greeff’s match-winning try and conversion after the hooter which sent Ellis Park into delirium.

The Boks led 26-9 after 60 minutes before seemingly running out of puff as the visitors raced in three quick tries to take a 31-26 lead.

The hosts had centre Marius Joubert sent off before Greeff’s last-gasp heroics where he ran a great line to burst through the Wallabies defence.

The Springboks were on the ropes heading into this encounter at the strangest of venues, the Royal Bafokeng Stadium.

Coach Jake White’s job was on the line as the Boks had suffered a humiliating 49-0 loss to Australia in Brisbane earlier in the Tri-Nations – after which the coach was called home for an emergency meeting by SA rugby bosses.

There was another defeat to Australia on the road (20-18, Sydney), as well as a 35-17 reverse to New Zealand in Wellington.

The All Blacks then thumped the Springboks 45-26 in Pretoria and the South Africans were given no chance ahead of the following week’s match in Rustenburg.

However, John Smit’s men dug deep and tries from wing Bryan Habana and No 8 Pedrie Wannenburg saw them lead 18-13 heading into the final quarter.

However, the All Blacks rebounded with a try by wing Joe Rokocoko to take a 20-18 with 15 minutes remaining.

The visitors looked set to hold on, before No 8 Rodney So’oialo was caught off-side, allowing Bok flyhalf Andre Pretorius to slot a match-winning penalty at the death.

They may have been the world champions, but not many tipped the Springboks to topple the All Blacks at Dunedin’s Carisbrook ground where they had never won before.

The Kiwis beat the Boks 19-8 in Wellington the previous week and were expected to continue their dominance having won 30 home Tests in a row.

But the game at the ‘House of Pain’ will be remembered for scrumhalf Ricky Januarie’s late solo try four minutes from time.

It was South Africa’s first win in New Zealand since 1998 and also their first at Carisbrook in eight visits.

JP Pietersen also scored a try, while the rest of South Africa’s points came from a conversion by Frans Steyn, three penalties from Percy Montgomery and two from Butch James, as well as a drop goal from James. 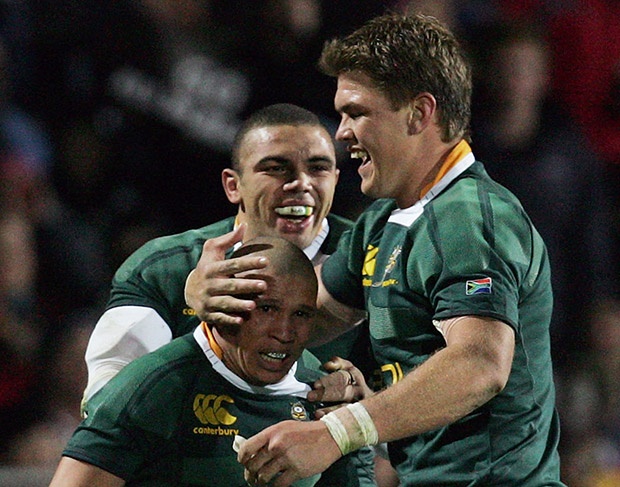 The Springboks had a torrid 2010 Tri-Nations, winning only one out of their six games and headed into this clash on the back of a meek 21-17 demise to Scotland in Edinburgh.

The Boks kept England at bay in the first half, heading into the sheds level at 6-all before a stunning second half display saw them stun the Twickenham faithful.

Tries from replacement loose forward Willem Alberts and winger Lwazi Mvovo, as well as three penalties and a conversion from flyhalf Morne Steyn did the trick.

After back-to-back away losses to Argentina and Australia, the Springboks were down and out heading into this clash at Westpac Stadium.

Bok rugby was at an all-time low after two horror seasons in 2016 and 2017 and the bookies gave Siya Kolisi’s men little to no chance.

However, in a high octane encounter, the Boks ran in five tries – two from winger Aphiwe Dyantyi and one each from fullback Willie le Roux, hooker Malcolm Marx and replacement back Cheslin Kolbe.

The All Blacks looked set to steal it at the death when they camped on the South African line, but staunch defence – which would become a hallmark of this Bok team – pulled the visitors through.

England were tipped to win last year’s World Cup final after a stunning annihilation of the All Blacks in the semi-finals.

South Africa, who lost to New Zealand in the group stages, had stuttered their way into the final with playoff wins over Japan (26-3) and Wales (19-16).

The Boks had copped criticism for their excessive use of the boot throughout the tournament but coach Rassie Erasmus caught England off guard with his game plan.

South Africa showed much more impetus on attack in the early exchanges, bullied England at scrum time and dominated the physical exchanges.

The Bok defensive line was also impenetrable and they fittingly produced their best performance of the year when it mattered most.