One of South Africa’s largest private hospital groups has told staff it expects 200 000 Covid-19 cases in the Western Cape by early July, while it expects cases in Gauteng to reach 100 000 by November.

The number of patients are only from the population who have health insurance.

In a letter circulated to doctors by Mediclinic chief executive Koert Pretorius on Friday, which News24 has seen, he outlined some projections by Mediclinic’s internal actuaries and statisticians.

Pretorius emphasised that the figure was a projection only, and was likely to change based on how the virus would spread in the coming weeks.

Surges were expected for other provinces as well, but much later.

For Gauteng, the expected surge would take place in November, Eastern Cape in August, while Mpumalanga and KwaZulu-Natal were expected to experience surges around September/October. 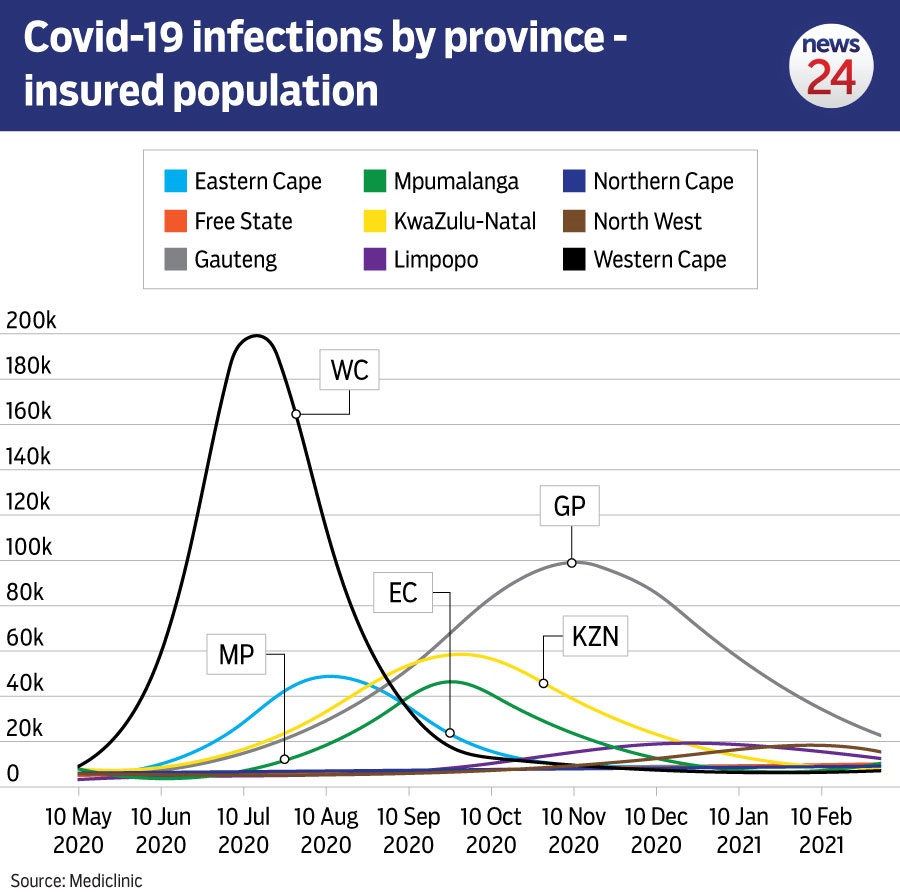 This illustration is a reproduction of a graphic included in Pretorius’ letter, and shows the predicted surges for each province as calculated internally by Mediclinic.

According to a presentation by the acting director-general for the Department of Health, Anban Pillay, to the Parliamentary health portfolio committee on 10 April, the Western Cape had a little over 5 000 beds available in the private sector – of which not all were high care or critical care beds.

Pretorius said the calculations were based on how many days it was taking presently for the number of infections to double – which was nine days for the Western Cape.

“Based on the doubling rate, this could mean that, among the insured population, there would be 200 000 positive Covid-19 individuals,” Pretorius added.

Pretorius said that, based on the market share Mediclinic holds in the Western Cape, a very high demand for beds was expected as the surge unfolded.

On Sunday, while announcing the latest national coronavirus figures, the Department of Health said it remained concerned about the Western Cape.

On Sunday, the single day increase in cases nationally was 1 160, the highest so far, of which 890 were in the Western Cape.

As of Monday afternoon, 16 433 confirmed cases were reported nationally, 10 035 of which were in the Western Cape. 3 731 patients had recovered in the province, while 166 deaths out of the national total of 286 were attributed to the Western Cape.

Professor Alex van den Heever, a professor of social security and management studies at the Wits School of Governance, previously told News24 that one of the health system’s vulnerabilities was its number of critical care beds.

Based on these figures, less than 3 000 critical care beds are theoretically available for use nationally.

Van den Heever said about half of that – 1 500 – were intensive care beds, which were necessary if a patient needed to be on a ventilator full-time.

READ | Alex van den Heever: We have not ‘flattened the curve’ and our current trajectory is very concerning