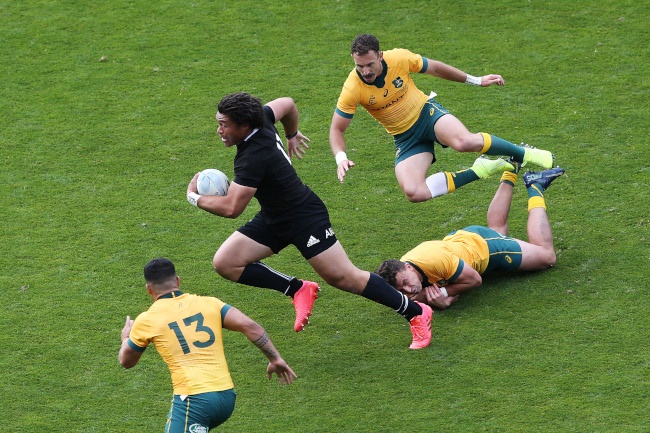 The All Blacks may have unearthed the next Jonah Lomu after 21-year-old Caleb Clarke proved to be a one-man demolition squad in the All Blacks’ 27-7 whipping of Australia in Auckland Sunday.

Clarke, the son of former All Black Eroni Clarke, takes an uncomplicated approach to using his 1.84 metre, 107 kilo frame.

“When you get the ball, just run. You don’t have to think about anything,” he said after his first Test start, after making his debut off the bench last week in the drawn first Bledisloe Cup Test.

As the All Blacks lifted their aggression and accuracy in Auckland, much of it was off Clarke’s bruising runs.

The build-up to Ardie Savea’s try was a standout as Clarke bulldozed his way through most of the Wallabies side before off-loading in sight of the line.

“I was really sore. I was trying to push his hand off.”

Clarke also bounced off four tacklers as the All Blacks worked their way towards Aaron Smith’s opening try in the first half.

Wallabies coach Dave Rennie was left counting the cost of 40 missed tackles, many of them on Clarke.

The comparisons between Clarke and Lomu, the former All Blacks wing who is regarded as rugby’s first global superstar, are obvious with both big, fast and direct runners and playing in the number 11 shirt.

The modest Clarke is humbled to be compared to his hero, who died in 2015 after battling a long-term kidney disorder.

Such was Clarke’s performance that he received a standing ovation from sections of the crowd when he was replaced late in the game.

“I got caught up in the moment. I wanted to jog and clap everyone else but then I started cramping and I had to walk,” he said.

It was also an emotional time for Clarke having his family there to watch, particularly his grandmother who was widowed earlier this year.

“The more special thing was having my nana there in the crowd… when I saw my nana that’s when the waterworks started.”