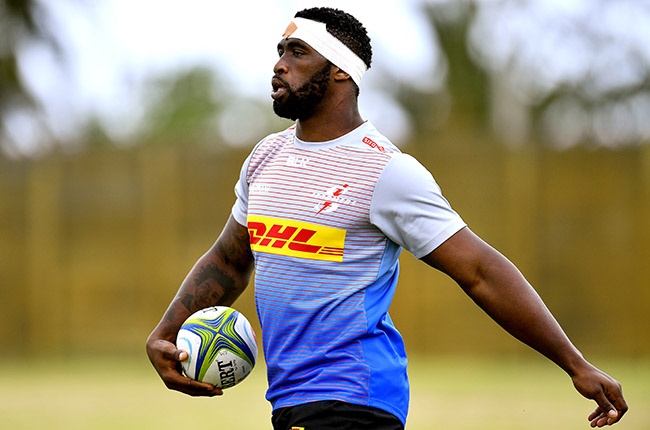 Siya Kolisi during a Stormers training session at the High Performance Centre in Bellville on 20 October 2020.

Springbok captain Siya Kolisi has been ruled out of the Stormers’ Super Rugby Unlocked clash against the Bulls this weekend.

Kolisi will be out for “two to three weeks” with a grade one hamstring strain, which is actually positive news given the fears that existed after he limped off after 20-odd minutes against the Pumas in Nelspruit on Saturday.

Stormers coach John Dobson confirmed on Monday that Steven Kitshoff and Scarra Ntubeni, who did not play against the Pumas after coming into contact with an individual who had tested positive for the coronavirus, would be able to train from Wednesday and would be available for Saturday.

Kitshoff will captain the side.

The other good news coming out of the camp is that flyhalf Damian Willemse, a late withdrawal on matchday ahead of the Pumas fixture, is “fine”.

“Siya’s injury is not as bad we initially thought. It’s a grade one hamstring, so two to three weeks,” Donson said.

Other players nearing a return to full fitness are wing Seabelo Senatla and centre Ruhan Nel, who Dobson said were still a “week or two” away, while wing Sergeal Petersen is around four weeks away.

The update on Springbok star Pieter-Steph du Toit, however, was not as positive.

“At this stage it seems like he won’t play this year,” said Dobson.

“With the final on 23 January we would do well if we get him on the field in this competition.

“I’m not expecting him to play in this competition. If we can get him for the last two or three games, then that would be great. The good news is that the muscle is regenerating. That was the big concern and where his career might have been in jeopardy.

“I don’t think he’ll be back this calendar year.”

Du Toit suffered a haematoma on his left thigh back in February but when the diagnose became one of acute compartment syndrome, there were fears that the 2019 World Rugby Player of the Year might never fully recover.